In a region of Saudi Arabia, around Mecca, the name aloe, saber, means patient. Aloes are considered “patient” plants because they are evergreen and require very little water. Men and women plant them at the edges of graves on a spot facing the epitaph to signify patience during the wait between burial and resurrection. 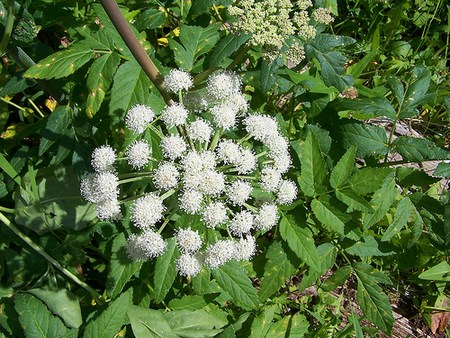 The American Indians used angelica for many medicinal problems: to discharge mucus from the respiratory tract, to induce vomiting, and to cure consumption and tuberculosis. They mixed poultices from angelica and the leaves of Artemisia Canadensis, a sagebrush, to place on the side of the body opposite a pain in order to relieve that pain. These poultices were also applied to swellings. The Indians of the Rocky Mountains made teas from angelica root and drank them as tonics to build up strength after an illness.

Beware the chamomiles ! Because the flowers contain pollen, tea made from either type of plant may cause contact dermatitis or other allergic reactions. People with known sensitivities to ragweed, chrysanthemums, or other members of the compositae family should be cautious about drinking chamomile tea.

During the Middle Ages, chervil was used for a variety of ailments. Eating a whole plant reportedly relieved hiccups, a practice still tried by some people today.

According to old wives’ tales, borage was sometimes smuggled into the drink of a prospective husband to give them courage to propose marriage. “I, borage, bring courage.”

Eucalyptus- there are more than 500 species of Eucalyptus – they constitute more than three quarters of the vegetation on the Australian continent.

An early Greek name for fennel was marathron, from maiaino, which meant ” to grow thin.” The seventeenth century British herbalist Culpeper wrote that “all parts of the fennel plants are much used in drink or broth to make people lean that are too fat.”

Blessed be, sweet ones.

Copyright © 2021 Create a free website or blog at WordPress.com.